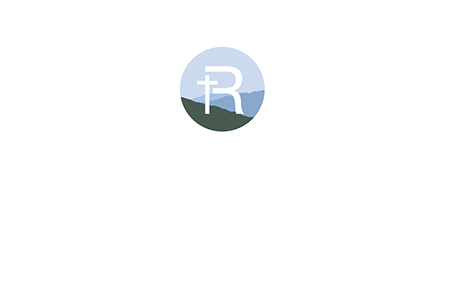 In the early 1900s, the land which is now the home of Ridgecrest Conference Center was a wilderness area with a few deserted cabins, a railroad track and a dirt trail leading west. The vision of one man has turned this area into the “Mountain of Faith.”

Born Bernard Hardee on January 22, 1871, Bernard Washington Spilman took on his father’s middle name as a tribute after his death. That same year, Spilman took another name as his very own when he dedicated his life to the service of Jesus Christ. God planted the vision of Ridgecrest within Spilman as early as 1895. It was to become a place for Baptists “to meet and to learn how to teach the Bible to the multitudes.”

Spilman served as Sunday School secretary for the Baptist Convention of North Carolina for five years, during which he conducted mass meetings called Mountain Chautauquas. He also set out on a quest to find the ideal spot to fulfill the vision God had given him. He searched places such as Waynesville, Hendersonville, and Mars Hill in North Carolina, and Chattanooga in Tennessee. In Mars Hill, he considered a site he had called “Little Mountain,” but he knew God was leading him to the “Big Mountain,” so he kept looking.

He finally found his majestic “Big Mountain” on August 4, 1906, when he stepped from the train at Terrell, North Carolina. The first visit to the site of Ridgecrest was more than a memorable one. Spilman reminisced about that visit in a 1941 newspaper article:

Marvelous view! We strolled west leaving the railroad track and came to a spot where Pritchell Hall, the large assembly hotel, is now located. We found a small stream and followed it to its source (Johnson Spring). Then we climbed the hill west and found an old fence of rotten rails. It was already broken in places. All the party climbed over. I, as usual, weighing 260 pounds, came last. I climbed the fence. When I was well balanced on top of the fence, every rail except the bottom one broke. It was a fairly good show.

Spilman knew this was the place. It was not only the mountain in his vision, it was also centrally located to New York, Chicago, Little Rock, New Orleans, and central Florida—within 500 miles from each. It would be accessible to multitudes of Baptists. In December 1906, his vision began to be realized. A committee was appointed to find a place for an assembly. (Most had already selected Ridgecrest). The committee included I. H. Tucker, B. W. Spilman, Hight C. Moore, N.B. Broughton and H. W. Battles.

Spilman was elected as General Manager and General Secretary for the new assembly. The act to incorporate “The Southern Baptist Assembly” was ratified March 8, 1907, and by the end of that year, 1,100 acres were purchased. Both the North Carolina Baptist State Convention and the Sunday School Board of the Southern Baptist Convention (now LifeWay Christian Resources) endorsed the project. They employed the very same engineering firm that had laid out the magnificent Biltmore Estate. The first summer program took place in 1909 and drew 600 people. Hence the beginning of a dream coming true. Changing the Name, but Keeping the Vision

Terrell, North Carolina, changed to Blue Mont to fit its surroundings. This became a problem for the railroad, however, because their shorthand codes for Blue Mont and nearby Black Mountain were the same. In 1912, Spilman suggested the name we have today, Ridgecrest.

During the first twelve years, Ridgecrest experienced many trials. The natural elements took their toll on the new assembly after a windstorm demolished the first auditorium in 1914. Later, a fire destroyed two of the main buildings, followed by the greatest flood in the history of the area, which almost put Ridgecrest out of business during the summer of 1916. Some personal tragedies also hindered success. In 1908, Spilman lost his daughter only a couple of weeks after her birth, and later his personal friend and coworker, James Tucker, in 1912.

After Tucker’s death, Judge C. Pritchard was elected as chairman of the board. He was able to negotiate a loan for the building of an inn. He also enlisted J. D. Elliott as a contractor, who made significant financial contributions toward the inn’s construction. By adjoining their names, “Pritchell Inn” was named in their honor (later Pritchell Hall). Pritchell Inn officially opened on August 1, 1914, with 54 rooms, a kitchen and a dining room. In 1926, the dual front porches were remodeled into large colonial columns. In 1962, old Pritchell Inn was removed and replaced by the Pritchell Hall we see today. It opened in 1964.

The original Spilman Auditorium with a classroom facility was constructed during 1938–39, after the windstorm had destroyed the first auditorium. It was then enlarged in 1953 by extending the front of the building. In 1972, it underwent another renovation and enlarged again, incorporating the older structure into its current design.

In 2002, Ridgecrest initiated a revitalization plan, beginning with the construction of Rutland Chapel, a 300-seat auditorium nestled in a beautiful wooded hillside. Then the Mountain Laurel Inn was added, with 228 deluxe accommodations, 8 conference rooms, a fitness room, and a 214-seat auditorium. In 2009, the Johnson Spring Conference Center was opened featuring a 600-seat ballroom, exhibit hall and additional classroom space.

In 2020, LifeWay Christian Resources reached an agreement to sell Ridgecrest Conference Center and Summer Camps to the Ridgecrest Foundation. The Ridgecrest Foundation is a collection of faithful individuals personally connected with Ridgecrest, thankful for this opportunity to continue to be its advocates and committed to proclaiming the Gospel of Jesus Christ. Honoring Legacy, Carrying on the Mission, Forging New Trails, Increasing the Impact.

Ridgecrest is located 15 miles east of Asheville, North Carolina, on Interstate 40 at Exit 66. We are approximately 30 miles from the Asheville Regional Airport. 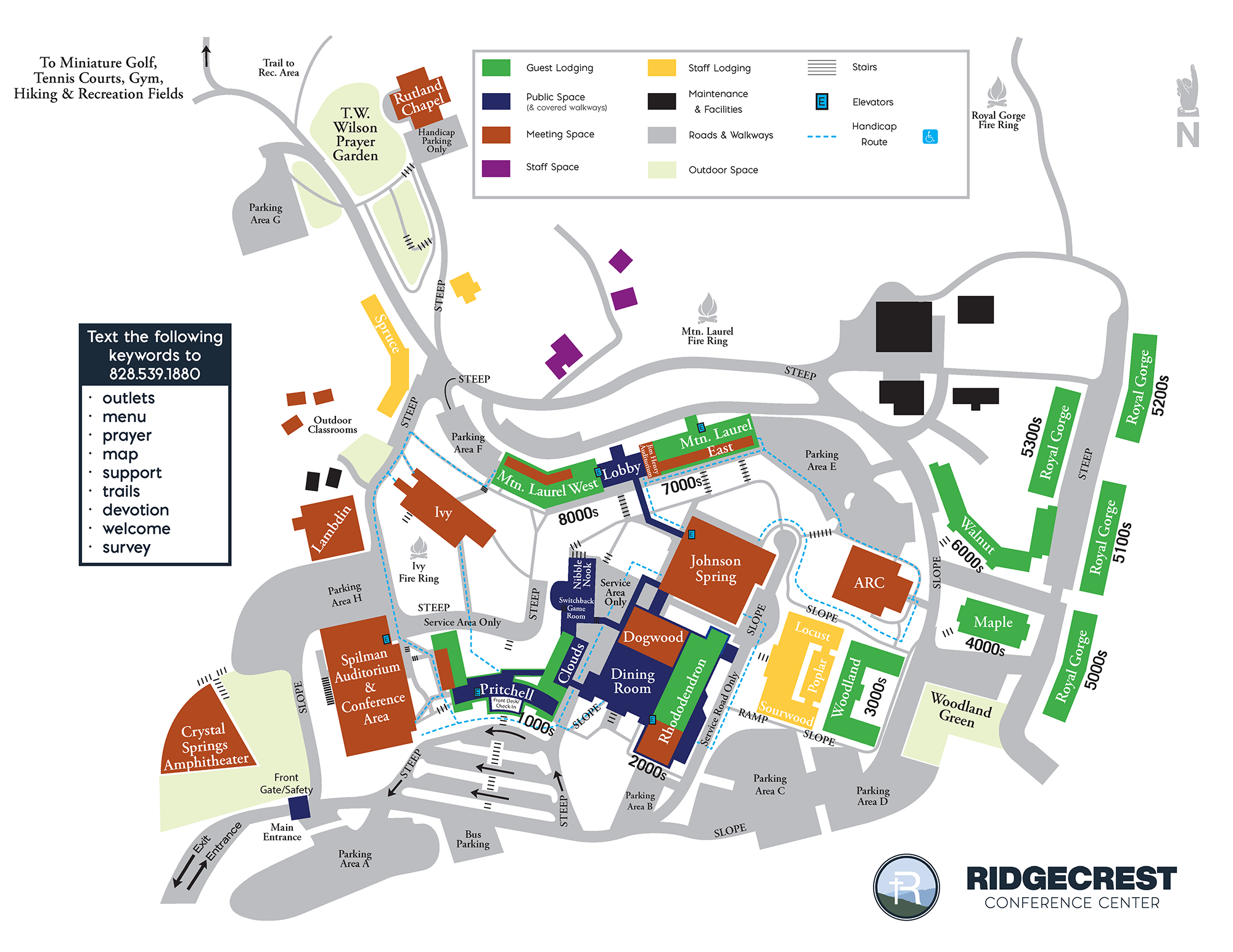 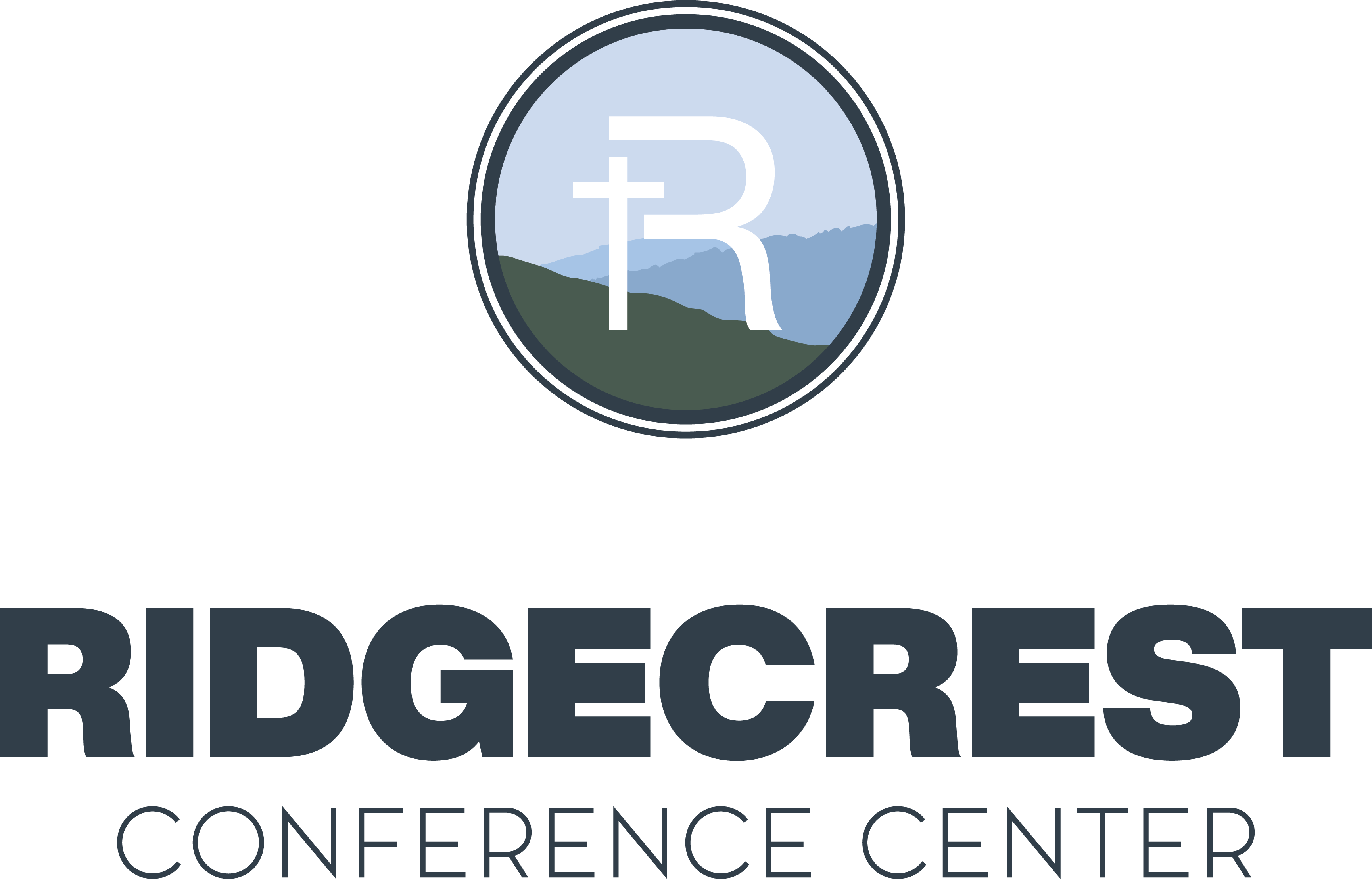